The Characteristics of the Model Swing 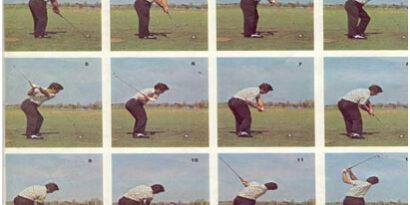 In Pursuit of the Model Swing

What if the Model Swing was Nothing More Than A Way to Produce Desired Patterns?

The reality is a good swing matches impact positions to the swing patterns being produced.  What in the world does this means?  Basically, it means that a golf swing needs to have parts that match if it’s going to be a efficient golf swing.  The key is matching address, backswing, downswing, and impact so that they correlate to produce a good shot.   These golfers cannot have the same downswing and impact characteristics if they are going to hit good shots.  They must match the downswing and impact to the swing patterns that they own.  This leads to greater consistency.  If one of these champions tried to copy the downswing and impact positions of one of the others, the results would be very strange and very poor.

The most essential ingredient to having a model swing is developing a swing based that produces consistent results that go toward a target.  Sometimes this means changing a set-up to help the downswing match the backswing.  Sometimes you change impact to match the downswing and follow through.  Sometimes you have to learn how to create an entirely new pattern to create your desired shot patterns.  You should only change swing patterns to help with increasing consistency in shot patterns.  A good teacher/coach is vital in helping you understand the changes that can be made to help you play better, more predictable shots.

Using the data from Trackman to help gather this information is vital in allowing me be less technical and much more confident in the changes that I want a student to make.  For example, if a student wants to play a draw but the path of the club is -2.5 degrees (across to the left) this leaves me with a few options.  One option is to help create a draw by aiming the entire set-up to the right of the target and allowing the “outside-in” downswing and impact to still right of the target.  I must somehow help guide this student to find a way to produce a path to the right of the target (for right-handed golfer).  Maybe a change in set up positions or ball position will produce a desired path.  Maybe we change the backswing.  Maybe the student finds a different feel, thought, and image for the downswing just by having more understanding.

We study great players to find the commonalities.  We delve into what they thought are the most important mechanics to master.  We study and continue to pursue more about the true physics and geometry of a golf swing, as well as learning more about bio-mechanics.  There are some consistent aspects that seem to show up in most good swings.  For example, most great ball strikers are somewhere near this position.

Most great ball strikers deliver the club with flexion (flat or bowed) maintained in the lead wrist and they allow the center of clubhead to remain behind the hands on the downswing.

Players may stand differently, their grips will almost definitely be different, the backswing motion will almost assuredly be different, but somehow they find a way to produce a very similar looking downswing and impact.  The key is to find the best way for you to deliver to club to the ball so you can hit more predictable, more consistent shots.  Look at the following pictures of two of the greatest players of all time, Sam Snead and Lee Trevino.  Dramatically different ways to play very similar shots.

Number 1 in the World

You must have an understanding of the relationship between the ball flight laws and the movement of the club to the ball  before you can make lasting changes.    Change your swing patterns and you will change your shot patterns.  If you know why, then you have chance to change the how!

Every lesson I ask myself the same three questions.

Once I answer those questions, I know the why.  Once I know the why, I can begin working on the how.  You can’t change the how without understanding the why.  It’s not a huge mystery why your ball went where it went.  Find a teacher that will help you understand the why, and it will make changing the how much, much easier.