What is your playing “intention” mindset? 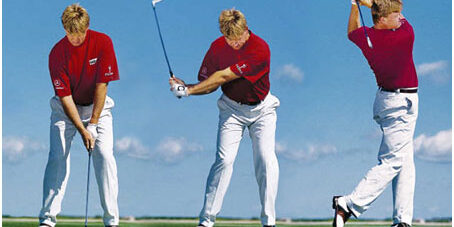 We all enjoy the great shot.  You know the one…it’s the shot that brings us back.  It’s the shot that gives you hope in future shots.  It’s that feel good moment.  Sports psychologists try to help understand how to think better so we give ourselves the best chance to execute this great shot more often.  Golf instructors help you learn the movement patterns so you can hit that shot more often.  Coaches help you prepare so you can hit that shot more often.   All of this is excellent information, and all of it helps you play better golf.  What is rarely mentioned is the intention mindset.  This simply is the mindset you have when playing a certain shot.  Is your intention to play to the maximum odds of scoring?  Is your intention to play a shot so you boast a bit to your playing partners?  Is your intent to just swing and hope?   Understanding your intention will help you accept shots on the course.

When you hit those terrific shots, can you think back to your mindset as it relates to intention?  Were you relaxed and just focused on playing this particular shot?  Did you play a shot that you felt comfortable with your chances of hitting a good shot?  Did you decide to try a difficult shot just to see if you could hit it, knowing that you could accept the consequences of the shot without allowing a poor shot to ruin the next shot(s).

Golf is fun, well. At least for that shot!   Why can’t we just do that more often, actually, why can’t we do that every time.  Hence the thoughts begin to increase as you wonder why you can hit a great shot occasionally, but not as consistent as you think you should.  What we fail to recognize is the intent of our process.

I’m much better on the range

“I don’t understand why I can be so good in practice, but so bad on the course”. If I’ve heard this once…you get the idea.  Everybody (including me) have said they are better on the range than the course.  There is a common mantra of golfers which is “Why can’t I get it from the range to the course why can’t I hit the ball the same as I do on the range”?.  Well, the answer is three parts.

The first answer involves the psychological aspect of playing and practicing golf.  Basically, most golfers don’t put any pressure on their practice, but put extreme amounts of pressure on their play.  Practice is rarely scored, measured, or scrutinized in any way that puts any ‘pressure” on the performance.   The complete opposite is true when we play.  Everything is scored, measured, and scrutinized; so much that it inhibits our performance.  So one of your goals is to change how you practice so it will benefit more when you play.  Our best scenario is to put as much pressure on your practice, and as little as possible on your play.  Try harder is practice and try less when you play.

The second reason that you are better on the range is more somewhat two-fold.  Basically, it’s definitely easier when you take one club and hit shots over and over again from the same place to the same target.  There is definitely a place for some of this type of practice, especially when you are making swing changes and working on changing movement patterns.  The other reason (this might hurt a little) is you aren’t as good as you think you are on the range.

Why do believe this?  Because I see it everyday when I’m using Trackman.  Also, I watch you hit balls and I can see. This picture illustrates a shot pattern for a 100 yard shot.  Notice that there aren’t any balls at 100, some at 80, some at 125, and some sprinkled in between.  This player can’t expect to hit good shots on the course, because he doesn’t hit good shots on the range.  Saying you’re better on the range is just not accurate.

There is a principle of playing golf I use in my coaching that I call “The Law of the Average Shot”.  This law says that your average shot pattern will likely be the same on the course as it is in practice, especially if you are using random practice and not just hitting one club at one target for an hour.    Your average shot dispersion pattern will give a great indication as to the actual strategy that is best for you to use on any particular shot.  Practice at random targets and random yardages and score your shots.  This will definitely help you play better golf.

The third reason is that sometimes you just want to see if you can hit a certain shot.  This is fun.  This makes it exciting.  It also usually makes your score go up.   The key is realize why you are playing certain shots and what is more fun for you about playing.  Tournament golfers must learn to play the odds of playing to their average shot, although every golfer deviates from this from time to time.  Phil Mickelson is a prime example.  He probably could have won 5 more majors by playing to his average shot.  However, that type of golf is not very fun for Phil.  He likes to see if he can a shot. Sometimes he does, and when he does it magical…just like when you hit that shot that you brings you back!  It’s okay to embrace those situations, but just pay attention to your intention.  Your intention mindset is saying “let’s try this”, and that’s perfectly fine.  But don’t get upset with your score when your intention is based on trying to see if you can hit a shot, when your average shot odds are prohibitive against it.  It’s very important not to let your poor score on that hole be the focus, because the score wasn’t your “intention mindset” as you were playing the shot.  If that was the case, you would have played the shot that gave you the greatest statistical advantage to score well on that hole.

I won’t get into a study on standard deviation, reversion to the mean, or any other statistical based conversation.  Just know that if your goal is to score lower, then you need to play shots that give you the highest chance of success and lowest chance of disaster.  Also, don’t be afraid to try shots just to see if you can play that shot.  Just understand your intent, accept the outcome, cheer like crazy when you actually pull it off, and move on to the next conquest!