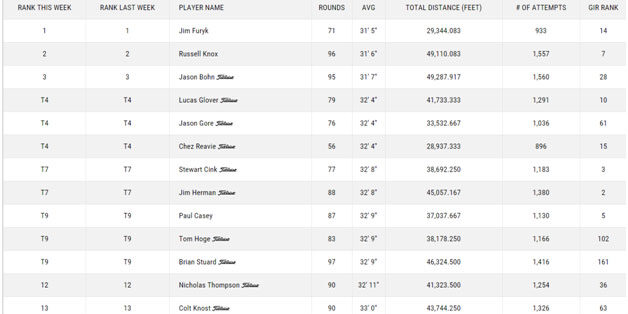 With the advent of ShotLink technology on the PGA Tour (since 2001), it is easy to find useful stats that may help you play better golf.  After all, it’s nice to know that Bubba hits it 937 yards, but that doesn’t really help most of us.  However, it can help us is to take information that we can relate to and learn from that information.

How Close Do The Pros Hit Approach Shots?

This is a chart of the top players for the year in 2015 as it relates to approach shots proximity to the hole.  I bet you would have lost the bet if you had been asked to pick a distance from the hole that the top player on the PGA Tour (Jim Furyk in 2015) would average for year.  Almost everybody I have asked always says something around 20 feet.  As we can see, Jim averaged 31”5” for the year.

Let’s take a look at this year.  I’m writing this March 14, 2016.  As of this date, Adam Scott is playing some unbelievable golf.  He’s making things look too easy, although he always makes it look pretty easy.

The best golfer in the world right now is averaging 32’8” from the hole.   I’m going out on a limb and say you probably aren’t good as the top ball strikers on the PGA Tour.  If that is the case, then it’s also fair to assume that your average distance on approach shots is at least 40 feet.

You may think you look like Adam Scott………………But you may need a bit more work.

Here’s the first thing you can do to change your putting practice.  Practice with 1 ball from 30 to 50 feet.  Practice reading the putt, and hitting putts from random distances that you face every round.  I like practicing with 1 ball for a few reasons.

How Many Putts Do You Make?

I hear this all the time….”I just didn’t make anything.  I hit the ball well and several putts I should have made, but I didn’t make anything.” What really happens is the player had a few putts from the 10-20 foot range, a few from 6-10 range, and a few from 2-6 range. In most cases, the player has underestimated how long his/her putts were.  7 feet is just over 2 paces.  Everybody thinks they are missing a lot of 5 footers, when in reality they are putting from 8-15 feet more often.

Most players think they should make every putt inside 15 feet.  I like that attitude before a player putts, but also want one of acceptance of the percentages after the putt.   As you can see on the chart, the best players in the world are 50% from 7’10’.  Let’s assume that you’re not quite as good as the average PGA Tour player.  Let’s make your baseline of 50% chance to make a putt at 6 feet.

Here’s how you practice to shorter putts to help lower your score.

Practicing like this will definitely improve your putting, which will make you happier golfer!  Everybody likes happy golfers!