You are here:
Precision in the News 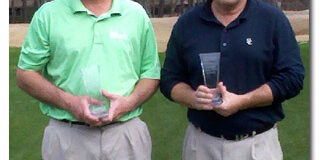 Robert Linville and Todd Smith both of Precision Golf School in Greensboro, N.C. didn’t need any drama when it came to their win in the Senior Pro-Pro Championship.  They took the early lead in the first round and never looked back, ending the tournament at 19-under and a staggering nine shots ahead of anyone who could even try to challenge them.  For their scores of 68-62-67-197, they took home a team purse of $1,250.

About the Pro-Pro Championship

An annual end of the year tournament and a favorite among the professionals, the Ashworth E-Z-Go Pro-Pro CPGA Championship is a three-day tournament on three courses featuring atypical playing formats and an emphasis on the team aspects of those formats.  Altogether, 238 professionals from all over the Carolinas joined together in teams of two to play Captain’s Choice (No.7), Modified Alternate Shot (No. 4) and Four-Ball Stroke Play or Best Ball (No.8) – formats that accommodate low scores and heavy competition.