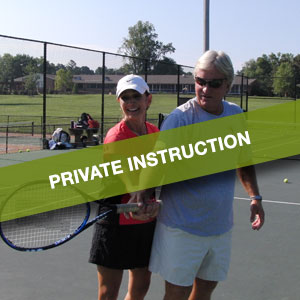 Precision Tennis Academy offers personalized instruction to suit players of all ages and all levels. Instructors are available for private instruction by appointment only. To schedule a lesson, please contact the instructor you would like to take a lesson with directly via email or call 336.510.4653

Coach McCain’s experience is unparalleled in the Triad. He has over 36 years of experience working closely with both national and international players. Many of these players have reached National, ITF and World rankings. Coach McCain’s students have won 12 USTA Gold Balls and have been awarded over $6 million in college tennis scholarships. A two-time NAIA Coach of the Year, coach McCain is the personal coach to current WTP Player & former #1 girls 18 and under and Duke University All-American Kelly McCain.

Before coming to Greensboro, Coach McCain worked with a group of top collegiate and professional students preparing for the professional tour at the IFPA Tennis & Fitness Academy in Tampa, Florida. He assisted in setting up their business, including an Academy, adult and after-school programs.

Prior to his priavte consulting, Coach McCain served as the Academy Managing Director of the Saddlebrook International Tennis program in Wesley Chapel, Florida. At the Academy, he designed personalized tennis training, fitness and tournament preparation for developing players. In addition, he designed programs for players learning the game and developing for league play.

Before merging his program with Saddlebrook, Dave founded and directed the McCain International Tennis Academy in St. Petersburg, Florida which was home to 30 sectional and nationally ranked juniors.

As a coach, he was named NAIA Coach of the Year in 1980 and 1981 and has taught numerous Tour players, College Champions and High School State Champions. He has also been named the Head Tennis Coach at Greensboro College for the 2006 season.

Questions for Dave can be directed to 510-4653 or via email at dave@precisioninstruction.com

Matt is excited to join Precision Tennis Academy as a Teaching Professional and working with the Precision Junior Tennis Program. Matt is originally from Charleston, South Carolina and have been playing tennis since I was a teenager. He went to Greensboro College in Greensboro, N.C. and played for their tennis team during my 4 years there. During my summers, he worked his way back to Charleston to be a Tennis Camp Instructor and work with young children and teenagers to develop mechanics, strategies, and conditioning. After college, he has assisted Greensboro Day School with their tennis program and has been coaching both the middle school and high school teams the last 5 years.

Purchase a Private Lesson Below!